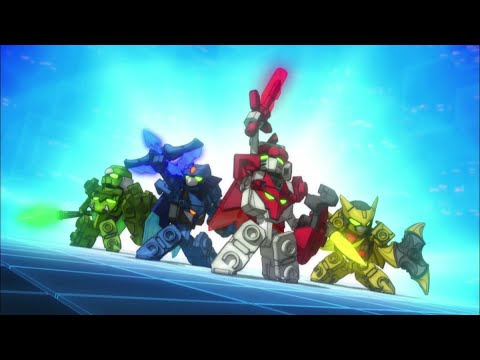 Tenkai Knights: Brave Battle will be available on 10/7/14 for the Nintendo 3DS!

SHAPESHIFT. BUILD. UNLEASH.
Saving the world is serious business and should never be taken lightly... It is only for the brave of heart. Guren, Ceylan, Chooki, and Toxsa were not planning on being heroes when they accidentally stumbled into an inter-dimensional portal.
Ripped through space and time, they reemerged on the world of Quarton as Bravenwolf, Tributon, Lydendor, and Valorn... the legendary and powerfully robotic Tenkai Knights! Oh, by the way, Quarton is definitely a world like no other.
Powered by a special Tenkai energy everything in this world can transform, combine and shapeshift. Now our four heroes hold the fate of two worlds in their powerful robotic hands and must master amazing powers in order to stop the evil Vilius and his army of shape shifting robots from destroying two worlds...
Features:
• Harness the incredible power of Tenkai Energy to shapeshift into one of the legendary Tenkai Knights!
• Fight against the evil Vilius and his army in an action-packed adventure based on the hit Cartoon Network animated series
• Customize and build your very own Tenkai Knight with over 100 different parts
• Hack & slash through enemies with punishing melee combos or pick them off from a distance with long-ranged attacks
• Co-op with a friend to complete missions based on the first season of the animated series, or battle up to 3 other players in VS Mode